A few weeks ago we took a trip to the Grand Canyon along the Grand Canyon Railway. For a photographer it was a great way to see both the Canyon and the real prize of the trip the old steam locomotive they had parked in the station at Williams Arizona. 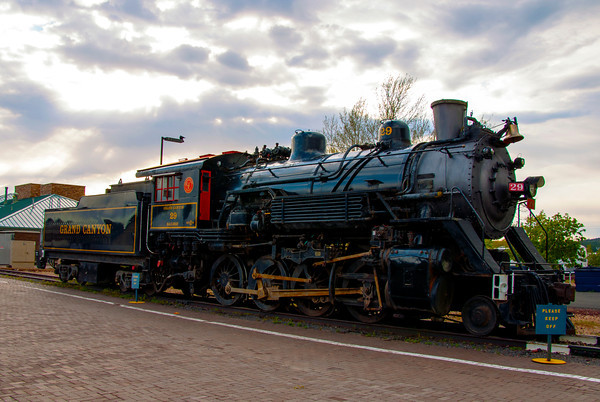 The train station in Williams is really an old time station that they have restored back to the way it was in the wild wild west. Before we boarded the train to the Grand Canyon they even had a wild west shootout show at the station. I said to myself if this is the way to start the day. I could have stayed in the station all day taking detailed photos of the station.

After taking a few photo’s we boarded the train and settled in for the ride. It is by far much better than driving in traffic to the Canyon. We sat back and took pictures of the landscape along the way. We saw wild cows and horses and all sorts of cool stuff. It was very relaxing to say the least. They had a musician strolling through the train cars entertaining everyone. We reached the canyon train station and there was a beautiful station on that end also.

We bought the first class ticket with lunch and it was worth it. They had plenty of beverages and light snacks on the train. We had some fruit and a few sprites and of course some coffee. I was ready to shoot when we got to the canyon. We boarded the tour bus which took us to lunch and then drove around the rim of the canyon. The tour guide was very knowledgeable and pointed out some interesting things. Plenty of time to take photos from all different angles.